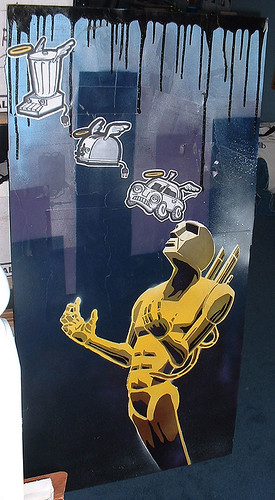 painting by livejournal
user artasfuck
What woke me up was the ticking. It wasn't slow and regular like time being chopped into seconds, tick tick tick, but more like the articulated movement of a mechanical insect walking with a hundred clockwork legs. Bloody unsettling was what it was, so I got up, unhealthy hour or nowt. I looked around and didn't see anything out of the ordinary until I happened to poke my head into the solarium and discover that I couldn't see the sky. Beauty. Guess what people, it's another damn plague.

Government promised we'd used all of them up this year, but they bloody well lied. I was expecting another eight months clear. It's not like they couldn't raise the forest up, block these annoying invasions before they even reach the city. I'm suspecting the idiots we voted are incompetant or lazy. More likely both.

Now I don't know how I'm going to get to work. I hear the defences marching by *thoom* but they're obviously too far away to be clearing my neighborhood of the pests. I'm debating tossing my boss an e-mail. If her neighborhood was cleaned up in time, she'll come in and think it irresponsible of me not to report in, but if it wasn't, then how's she to know I never put any hours in? She'll assume I was working all day. It's like a free paycheque. I've still got some time to decide. An hour or so to have breakfast in and brush my teeth. I'll post in a bit, tell you what I'm doing.

If I'm staying home, does anyone want to risk the tunnels with me? We could get a beer over at Thumbelina's.