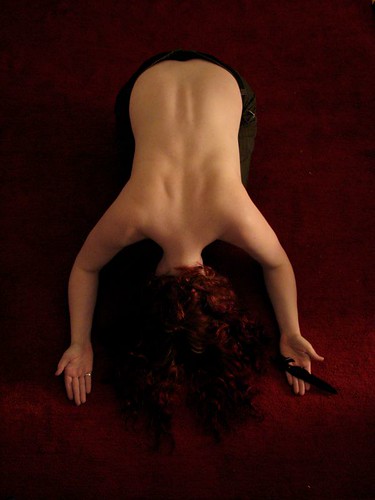 A straggler into my picture sale, this one went to Andrew Brechin,
Vancouver SCA geek, border guard, co-founder of the Topless
Wish Fairies, festival volunteer, & costumed Cthulu impersonator.
"We need to have an arguement." "An arguement?" "Yes, you go first."

Your hair, it will turn white with the collected frost from your breath, but it's beautiful as long as you remember not to touch it. The sun shines for miles over the snow, glitters off your eyes, slices through your intense smile, but the cold doesn't care. Bother your frozen hair, twist a lock around a black gloved finger, and it will break with a slight crystalline sound like glancing at a lover through a rear-view mirror. The chill will have won.

No one seems to jay-walk in Calgary, I don't know why. It felt appropriate to jump from the train platform onto the street, to look around the back of a departing train to check for traffic, like it was a gesture immortalized in perfection years before I was born, waiting for us to inhabit it.

Inside the skeleton of the place, there seems to be a newborn energy, a sussurus as one wave of promise flows back and meets the next one sweeping in, like the folds of the sea worn like a dress. It will not live forever, but it seems to hold the eternal promise of apples on the tree, green as metaphorical money. Something sweet to be tasted, as long as you're willing to let it ripen.

- anatomical socks
- how to use ruroshiki

You will learn the proper art of layering clothing, treating the textures of wool and cotton like gesso and oils. Your wardrobe will acquire a tinge of plaid, a wet dog reaction to rain. Walking inside is for locals, fifteen feet up in uncomfortably crowded pathways and tunnels suspended between downtown buildings. Outside is where it's at, where all the cool kids hang, freezing.

By the day of departure, temperature adaptation had kicked in, and, except for the rumbling fixation on enthusiastically swollen hockey headlines, the newspaper was less foreign. There was becoming here, a tribe I could infiltrate. Remembering gloves had become automatic. The patterns of the one way streets, a familiar philosophy learned from a minivan.

Without mountains, the sky is unrestricted, the horizon the proverbial dog, tail wagging, waiting to run for days. Limitless. From the highway, North, the city looks like a scale model of an architect's small, commercially printed card, something kind, with a phone number on the back. Inside invisible bounds, where unkind houses melt into the prairie, the city seems like a crumpled ship, collapsing the possibilities of flight into a very long walk.

My music on random. Snare snap, three beat four four, lifting on the three. The lyrics are enthusiastically running backwards, something groovy and probably bizarre that I really like. Familiar guitar. I'm not even sure what I'm listening to, I'm only listening with half an ear. Suddenly, my head snaps up. What? I know that voice. Even through backmasking, my blood knows that voice. The Men Of Dreams and Secrets. Billy Nayer Show. My relief when I turned out to be right had absolutely nothing on how hard I laughed when I ran the song in reverse. "She couldn't get it out and it REALLY, REALLY HURT!"


This charming little film was hand-painted with house paint on paper over a course of several years by Cory McAbee in his bathroom. This should give you an idea of the implicit dedication to creative, sparkling intelligence with which he founded his addictive band, The Billy Nayer Show. I cannot reccomend them enough. Warmly glowing songs that teasingly defy definitive genre, straining at the leash of epic, mystifying humour, no one else in my experience has ever written a song about the smell of sex that's light, dirty, tuneful, regretful, and oddly restrained. "And all the rest of your friends watched you leave together, so they know."

They're also 100% responsible for one of my All-Time Top Five Favourite Films, American Astronaut, a movie so good that it was introduced to me as a way to get into my pants. (Which, in light of recent events, if you look at things sideways and leave out a lot of facts, could be said to have just worked for someone involved with the project. How embarassing.) Breathtakingly impressive, the cinematography's like an outer space reply to Six-String Samurai, while remaining absolutely unique. I've given lectures on how much it kicks ass. Buy it here. Seriously. And then have a movie night. Invite all your friends. Hell, apparently it could even get you laid.

I would write more about it, except the best way to see American Astronaut is to simply find a copy, unplug your phone, turn off the lights, and go in blind.

Don't know anything about it. At all. Because I said so. It'll blow your socks off.

To be fair, they're not for everybody in the same way that not everyone appreciates David Byrne or Frank Zappa, (as I'm writing this, I'm listening to a rather ludicrous short story about a princess who isn't allowed to keep her kittens unless they can carry their weight in the household), but track some down, give them a try. If we can win even ten more converts, think of the good that would do. Sponsor an album and they'll immediately send you a wonderful CD, full of hope for the future. By sharing the wealth, you'll make a difference, for less than a dollar a day! Think of the children!
Collapse