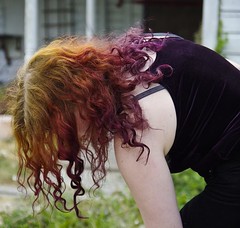 We've decided to paint the guest room library the colours of a Hypselodoris nudibranch bullock, but darker and a bit richer, leaving us with aubergine, pumpkin, sunflower mustard, and crimson red. Well, really, I decided and David took a look at what I was talking about and said, "No, you're not too geeky. That'll be awesome."

Which means, as Nicole pointed out, my apartment is beginning to unintentionally match my hair.

She stayed over on Saturday night and watched Ghostbusters with us, after we helped her emergency move this weekend, instead of going out for Hallowe'en. (Ray was going to help her, but he accidentally bailed, leaving her in a bit of a panic, her car shaky from a Friday accident and too small for her things, so I called up my mother and asked to steal her and her van for the evening.) The whole thing was a giant ball of sticky, fidgeting stress, all wrapped up in her raw and recent post-accident break-up that left her spending Friday night in her car, but my impromptu rescue thankfully worked out. David and I were enough to help haul things out of Nicole's a day overdue storage container, my mother's van was a perfect fit to tetris cram in absolutely everything, and her room was just the right size to set up her bed and neatly avalanche pile her things on it without breaking anything or making a mess.

Seattle-kilt Tony came by for a Saturday visit too, which was also a treat, though a less fraught one. We went for breakfast at the Pannekok House with him and a batch of equally fun-clever Seattle folk, (and David and Dominique, though obliquely, as they were one table over), then dervished our way from there to tea at my place, where Nicole had holed up to take a shower and decompress from her awful Friday of Stress and Doom. (You did catch the theme there, I hope.) It was nice. The four of us sat in the living room and played with Emerson the Emo Bunny, drank honey lemon ginger tea, and shockingly didn't talk about anything terrible. Next time I'm in Seattle, I'm going to try to make sure to see him. Next time, too, I hope to bring David. It's about time those southerners met mah man.

"How do we learn? What exactly do sleep and stress do to our brains? Why is multi-tasking a myth? Why is it so easy to forget—and so important to repeat new knowledge? Is it true that men and women have different brains?"

Following links from a TED Talk last week, I came across an interesting brain-hacking website for the book Brain Rules: Principles for Surviving and Thriving At Work, Home, and School, by John Medina, a developmental molecular biologist and research consultant and director of the Brain Center for Applied Learning Research at Seattle Pacific University. What little I've read so far has been interesting and nicely bolsters some of my own inexpertly cobbled together theories on memory and learning. (Though nothing beats the annuals, journals and articles I regularly hunt down and devour. Science is yummy.) There's twelve rules in all, and each rule has a corresponding tutorial page on the site that's meant to reinforce the concepts in the books.

They, of course, recommend reading the chapters first, but this is the internet! Onward video!

FYI: How McCain will win.